Difference between revisions of "Flamethrower" 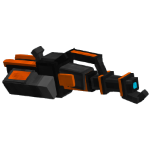 The Flamethrower is a ranged weapon which uses Hydrogen gas as its fuel. It is fairly effective against mobs as it deals damage when they are directly hit with the stream and sets them on fire. It is most effective on large groups of mobs, where the user can hose down the entire group with fuel at a short distance.

You can switch between three fire modes using Shift + Item Mode (default M). The modes are

1 Items that can be cooked multiple times are usually in their final form. For example, the Big Reactors mod has a smelter recipe for charcoal that cooks them into a graphite bar. So, if you fire a Heat stream at a log you'll likely end up with the graphite bar instead of the charcoal.