Difference between revisions of "Electrolytic Separator" 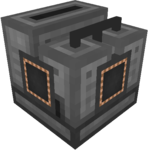 Please note that while the Electrolytic Separator does take Energy Upgrades, they don't actually affect the machine's energy efficiency, for balancing purposes.

Categories:
Retrieved from ‘http://wiki.aidancbrady.com/w/index.php?title=Electrolytic_Separator&oldid=6305’
Cookies help us deliver our services. By using our services, you agree to our use of cookies.